MercerTrigiani attorney, Michael Zupan, temporarily set aside his keen litigation skills when he donned a ruby red suit and hat to play Santa Claus in the 39th Annual Scottish Christmas Parade.  As the parade's guest of honor, Zupan greeted the community from atop a fire truck during the parade's finale.  Playing the "jolly old elf" is becoming a MercerTrigiani holiday tradition - last year, firm principal, David Mercer played Santa in the holiday parade.

During the November Breakfast Briefs, Jeremy Moss advised clients and guests on tips and guidelines on "sin licensing" when alcohol, gambling, movies and music are offered at special events held on community association property. 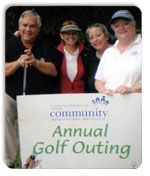 MT attorneys Mike Zupan  and Jeremy Moss (third and fourth from left) pose on the fairway with CAI members at the Old Hickory Golf Club in Woodbridge, Virginia.

Trigiani Named Among 2009 Women of Influence in Virginia

MercerTrigiani attorneys celebrate Pia's recognition as an Influential Woman of Virginia during the May 16 awards luncheon at the Jefferson Hotel in Richmond, Virginia. 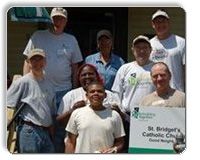 Phil Baxa, a litigator in the Richmond office,joins volunteers from St. Bridget's Catholic Church with Rebuilding Together.The volunteer program repairs and rehabilitates homes of low income, elderly, and disabled people who own their homes but are unable to maintain them. The program is centered around a one-day "blitz" held on the last Saturday in April when more than 1500 volunteers each year make major and minor repairs to qualified homes. 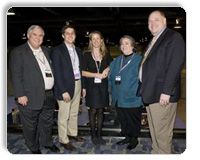 MercerTrigiani attorneys (left to right) David Mercer, Jeremy Moss, Janie Rhoads, Pia Trigiani and Mike Zupan greet members attending the March 2008 Washington Metropolitan Chapter of Community Associations (WMCCAI) Conference and Expo. The firm's principals have held leadership positions with the national Community Associations Institute (CAI) and regional chapter. Mercer served as president of CAI in 1986. Trigiani was WMCCAI president in 2000 and has received numerous awards for her service to the chapter. Most recently, she was named 2008 "Educator of the Year." Moss was named the chapter's 2008 "Rising Star" and serves on the publications committee. Zupan is a member of the education committee and Rhoads serves on the Virginia legislative committee. 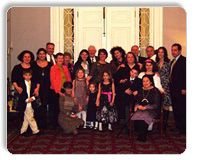 Members of the extended Trigiani family came from near and far to attend a March 18 dinner hosted by Gov. Kaine and his wife Anne Holton at the Governor's Mansion. Pia Trigiani (second row, third from right) was appointed by the governor last summer to serve on Virginia's Common Interest Community Board and she now serves as chair of the CICB. Her sister, award-winning author, Adriana Trigiani (standing behind Pia), is currently promoting her latest novel, "Very Valentine" at events throughout Virginia. 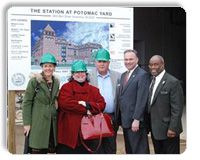 Attorneys Janie Rhoads, David Mercer and Pia Trigiani accompanies Virginia Gov. Timothy M.Kaine and Alexandria Mayor William D. Euiller during a March 17 hard-hat tour of the Station at Potomac Yard. MercerTrigiani was asked to create the governing documents for the three condominium units which are part of the cutting-edge,mixed-use project that includes a firehouse - considered the first housing development in the country to include a firehouse.